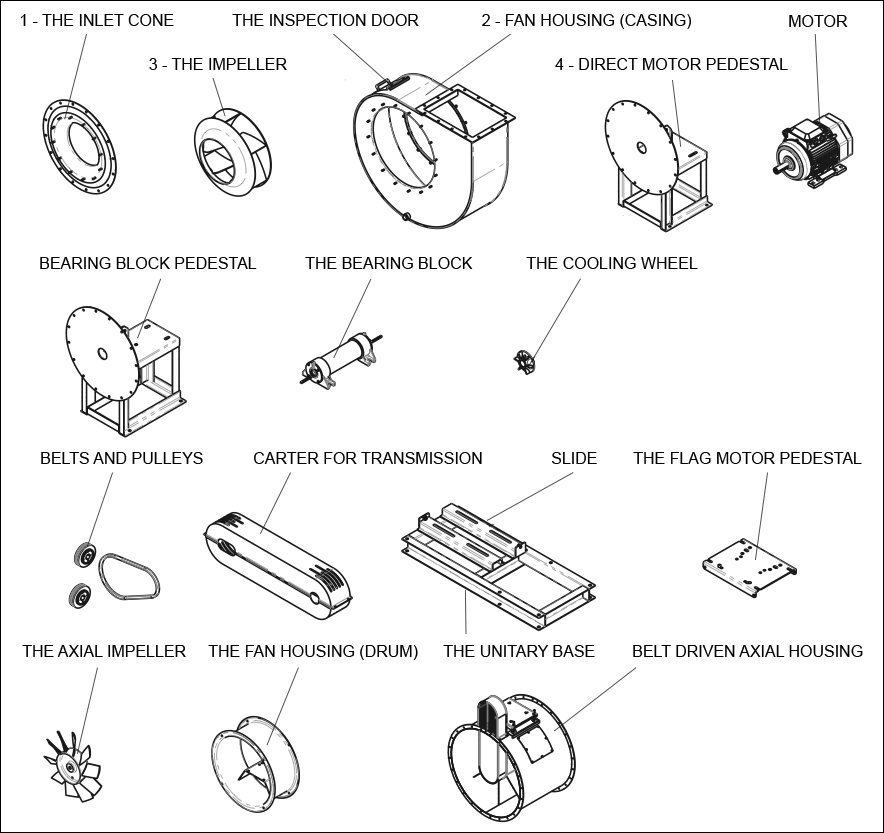 The Inlet cone: is a component for directing air into the fan housing. It has usually another function, that i sto link the fan to pipes. Inlet cone dimensions and shapes depend on the type and function of the industrial fan.

The impeller: is the real heart of the industrial fan. It’s a rotating component on which are placed the blades (that can be backward, forward or straight blades, depending on their use).

Fan Housing (or Casing ): the housing is the structure that contains the impeller; the air (or the fluid) to be handled passes through the housing and it moves toward the ventilation system. In particular, the air in the housing is compressed and, consequently, its speed increases. The performance of the fan depends on the physiognomy of the impeller and on the shape of the housing too.

The inspection door: is a small door placed on the case, very useful for inspections or to perform ordinary or extraordinary maintenance.

The motor pedestal: is the support where the fan is installed onto, distinguished between direct motor pedestal (used in direct driven fans) or bearing block pedestal(used in belt driven fans). In fans of big size the pedestal is directly welded on the case.

Consisting of shaft and bearings, the bearing block (support) is the component in charge for the transmission of the industrial fan. The bearing block is stressed by the mechanical forces such as velocity and couple, which are related to the belt drive

The cooling wheel: is a small impeller slipped on the impeller hub for direct driven fans, or on the support shaft for belt driven fans. It is used to dispose of/dissipate the heat of the air flow, which blows through the case, to prevent damages for the most delicate parts, like the engine (bearings and electrical parts) or the support (bearings and mechanical parts).

Belts and Pulleys: they are provided within the “transmission” of the indirect driven fans. They must be chosen by qualified technicians: both the desired performance of the fan and the nominal number of engine revolutions(rpm) affect their choice.

Carter for transmission: its aim is to protect the drive belt by external agents, and simultaneously, to increase the security of the belt arrangement, in this way operators avoid accidental contacts with the moving belt, especially if the belt breaks.

The Flag motor pedestal: is a base of the motor on the side of the chair. The motor is fixed on it.

The axial Impeller: is the rotating component of axial fans (which are provided with airfoil blades in aluminum die castings). The air flow meets and leaves the impeller along surfaces which are coaxial to the air flow itself.

The Fan Housing (or drum): is the housing of the axial flow fan, which includes a welded base for the engine, to create the axial air flow.

Belt driven axial housing: is the belt driven version of the drum. The support is fixed on the base, and through the transmission it is connected to the external engine.

LiveCurve is the interactive system for the search and selection of industrial fans, based on the curves of flow and pressure. See video tutorial or Try it now!

Concerning Industrial Fans, you cannot help dealing with ATEX, sooner or later. This acronym (made up by the first letters of the words ATmosphéres and EXplosibles) identifies two different directives of the European Community: No. 2014/34/UE, that became law on the 30th March 2014, which regulates the devices and machinery working in potentially explosive atmospheres, […]